Our 75th Anniversary fell in the middle of the COVID pandemic so there was a question over whether it would be able to go ahead.  We were all very relieved when the regulations in place at the time meant that it could.  It was held  in the Radisson Blu hotel, where we usually hold our monthly luncheons.

On arrival guests were greeted with a glass of bubbly and tempting plates of canapés.  Ally, Catherine and Irene were doing a brisk trade selling raffle tickets as the prizes were very attractive indeed. 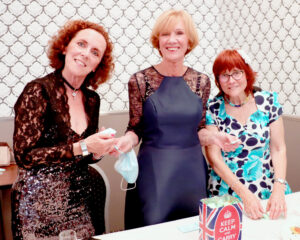 The club always loves a party and this special occasion was truly one to celebrate and dress up for. There were ball gowns, cocktail dresses, trouser ensembles, jumpsuits and Vimla in her beautiful sari.  The men didn’t look too bad either, some sporting dinner jackets. After all the Covid restrictions and various cancellations, we were incredibly glad that the evening was possible and this was just what we needed, a Ball. Everyone was looking amazing in their finery and so looking forward to a good night out.

We took our places in the Europasaal Ballroom, which had been decorated  beautifully by the Committee, predominantly in red, white and blue. Nine tables were set to accommodate the 72 members and guests, with each table given a name from the greats of literature and poetry and accompanied with a corresponding quotation. One of Churchill’s to mind was particularly relevant: “A nation that forgets its past, has no future”. We, as a club, and North Rhine Westphalia, as a State, both celebrate the past, yet look to the future. 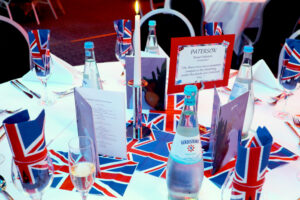 On one side of the room were tables for the buffet and on the other side the disco had been set up with life size cardboard cut-outs of the Sussexes, the Cambridges and our Queen. A lot of care and attention had been paid to the organisation and decoration.

Alison, our Madam Chairman, in her beautiful silver sparkling dress, welcomed the club’s Honorary President, Theresa Courage, her husband, HM Consul-General, Rafe Courage, and all the members and their guests to the 75th Anniversary of the British Women’s Club. Not only was her dress sparkling, her sparkling and bubbly personality shone through, too. She reminded us of the founders of the club back in 1946, just a year after the end of World War II. These were British women who had been attached to the staff of the Commissioner, Mr. William Asbury, probably his wife as well, but some who were married to Germans and had lived here through the war. They all were away from their homeland, many had suffered loss, hardship and deprivation and they joined together as The British Wives’ Club to alleviate homesickness and to do good deeds in the area. Alison told us that the club was registered as “The British Women’s Club e.V Düsseldorf” in 1966. She paid tribute to the Great Dames of the club, who are no longer with us, but who were respected and remembered with great affection: Betty Stollwerck, Jennie Frege, Jean Hunter-Schulz, Erika Jansen and Beatrice Stadelbauer to mention just a few, whose personal history included the wartime. She listed the anniversaries of the past, which had also been celebrated in style: the 40th in the Interconti under Jennie Frege; the 50th in the Breidenbacher Hof under Bernie Lindop; the 60th in the Steigenberger Park Hotel,  under Joyce Fuhrmann, the 65th in the Old Residence on Rotterdammer Strasse under Linda Longsden and the 70th in the ArabesQ Restaurant under Tricia Roberts.

And going down in history will be this evening’s 75th Anniversary Ball at the Radisson Blu under Alison Benedickter and her capable Committee. When the cardboard cut-out of Prince Harry and Meghan fell over, she quipped “Meghan, behave yourself!” There was great laughter and at the end of her speech, which was delivered with confidence, charm and humour, great applause. Interestingly, we have come full circle, as in 1986 for the 40th Birthday Bash it was in the Interconti, which today is the Radisson.

The Buffet was then officially opened. We were truly spoilt for choice. You could have freshly carved roast beef or pork, fish, potato gratin, buttered vegetables or Ebly with wild mushrooms. For starters there were various salads, smoked salmon and a cream of parsnip soup. Desserts didn’t disappoint either with chocolate tart, caramel trifle, berry casserole and vanilla sauce and a very healthy option of fresh fruits.

The lights were lowered and a trolley was rolled in by Alison and Catherine. It was our Birthday cake, a rectangular Union Jack with 75th in the middle, surrounded by lots of small circular cakes also topped with the British colours of red, white and blue. The disco lights, again red, white and blue, flashed and we sang a very jazzy “Happy Birthday, Happy Birthday, Happy Birthday to you… … … … ….” By this time, we were all so full, we didn’t have room for cake. The cake was later available for those who wanted some or you could take some home.

Rafe Courage then took the floor, congratulating the club on its special birthday and thanking Alison and her Committee for organising this evening. Of course, this year was also a special anniversary for the State of North Rhine Westphalia. Back in 1946 the British Government acted as marriage broker in what was termed “Operation Marriage” bringing together the province of Westphalia and the northern parts of the Rhine province. A year later the former State of Lippe was added. In the centre of the State’s Court of Arms is the Red Rose of Lippe. Rafe went on to tell us about the special relationship between Britain and Germany, and especially between Britain and the State of North Rhine Westphalia with Düsseldorf as its capital. The city is calling this anniversary one of “Freundship” because of it and Greater Manchester and the Ruhr Area have twinned this year. The twinning of Düsseldorf and Reading goes back to 1946. Rafe wished the club many more happy birthdays.

Alison and Catherine returned with another trolley overflowing with three hampers in varying sizes from Marks and Spencers and a special prize of a night at the Radisson with meals and use of Wellness and Gym facilities. Raffle time! The delighted winners came up to claim their prizes. Alison thanked everyone for their generosity in buying raffle tickets, which will help our chosen charities. She introduced and thanked our DJ for the night, Theo Fitsos. She went on to praise and thank the Chef and the staff of the hotel, and especially her committee, both of whom had truly done us proud and made this Anniversary Ball so very special.

With more flashing lights, continuing in good British tradition of red, white and blue, we could take to the dance floor. The D.J. Theo played many different genres of music and started off with Gloria Gaynor singing “I will survive” and “It’s Raining Men” from the Weather Girls. We danced to various renditions by Adele and Queen and some good Oldies from the 60’s including ABBA. The music was infections and we were soon gyrating our hips and when “Let’s Twist Again” came along we were twisting away. Not only was there dancing but you could hear singing along too. “You are the Dancing Queen, young and sweet, only… was it 70” ! Well, 75 doesn’t rhyme. And we were certainly “Having the time of your life, diggin’ the Dancing Queen”.

A huge thanks to Alison and all the committee for organising such a memorable evening.  Another milestone in the history of our illustrious club. 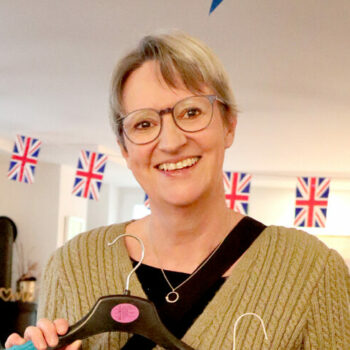